If you have questions or comments concerning any non-support related 3Dconnexion topic, please use this forum.

First a little history...
When I got my first spacemouse, it sparked the OCD in me, and I felt the urge to find out everything I could about them. Google became my best friend, and slowly my collection of bookmarks, images, and PDFs began to take on a life of their own. At the same time, my personal collection of various spacemouse models continued to grow.

Now that I had lots of information gathered together, the OCD demanded that it be organized into some semblance of order, that could be read by others. For a short time, I had it all organized as a series of webpages, on a computer in my basement, but hosting a website on a dynamic DSL connection was problematic. Apart from the ever changing DNS, the random bandwidth spikes interfered with my gaming habit.

So I setup the Spacemice Wiki and moved the majority of my collected data to it.

I have more things that I would like to add to the site, but I am hesitant to do so, because of possible legal/copyright issues that may arise.

I have many driver CDs (SpaceWare) which were issued with the hardware which predate what is available in 3DConnexion's archive. They also contain video files, and PDF brochures, which have long since been outdated, but I feel have historical significance.

I would like to setup hosting for these files, and a YouTube channel for the video content, but not without at least a hint of approval.

I have a copy of 3dxware 3.6.4 for 32bit windows, which supports ancient spaceball devices and is no longer available in the archives. Would there be issues if I made it publicly available?

Technically it is already 'public' as it can be found on driverguide.
However, they either want you to pay them money, or agree to install their suspicious-ware installer.
Spacemice -- Input devices for a 3D world.
Top

As much as we like (and love to visit) your site, we cannot be on the record stating that you're free to distribute old, deprecated software from 3Dconnexion. You should carefully read the licensing terms.
Top

I completely understand how you guys cannot make any kind of legally binding decision about what can/cannot be distributed.
I thought maybe it might poke someone higher up that was in such a position, to allow someone to distribute antiquated software for free, rather than the only source providing it make money and/or distributing their questionable software along with it.

Either way, no skin off my nose.

In the antique hardware department.......

Today the ebay and the USPS delivered a 'SpaceController' to my front door. Not the new device from Germany, but the one mentioned previously by jwick, built by SpacetecIMC in the 90s. Looks physically the same as a Spaceball 3003, but is black with slate blue ball and buttons.

When I tried Xdriver in debug mode, I got a lot of trash and no ident string. At first I thought that I had bought a defective device, which wouldnt have been surprising considering its age. But, I noticed the trash was coming in a repeatable pattern of data blocks similar to other Spaceballs, with larger blocks where idents would usually appear.

Thats when I recognized the pattern as being the same as what the SpaceOrb360 throws out.

I setup inputattach and a joystick program, and poof.. worked perfectly.

Updated the spacemice wiki with my limited findings, and will have pics soon.
Spacemice -- Input devices for a 3D world.
Top

May have bitten off more than I can chew with this one.

Thanks in part to input from moderator jwick, I managed to locate and acquire a Dimension 6 spaceball built by CiS circa 1988.

This thing is a monster! All metal construction, large rigid ball.. definitely designed with industrial applications in mind, and not the desktop.

Unfortunately, there is almost no information about the device found anywhere online. I would like to try to get it to interface with a PC, but do not know the pinout of the 15-pin connector on the back. If any of the 6dof old-timers out there have access to any material dealing with the Dimension 6 and could get it to me, my website would be eternally grateful.

I did find a military Naval document which mentions the Dimension 6 and references its 'Users Manual' so I know it existed at one time... Finding that would be a veritable goldmine.
Spacemice -- Input devices for a 3D world.
Top

Finally got my hands on a Spaceball 1003!

Will have to build an adapter cable to test it out. It's serial port is the wrong gender compared to all other serial spacemice.
I know I will need an external power supply, and IIRC it uses also non-standard pinout, so a simple gender swapper will not work.
Spacemice -- Input devices for a 3D world.
Top

25-pin or 9-pin connector on the back?
What is the serial number?
Top

jwick wrote:25-pin or 9-pin connector on the back?
What is the serial number?

Also picked this up...

Are these some of yours?

Old Mac ADB prototypes? The stickers imply November and January... any clue to a year?
I would also guess that any software for these has long since ceased to exist. These were found in the bottom of a box full of SpaceOrb360s bought on eBay.
The buyer offered them to me before they got dismantled for an Arduino project.
I traded him a couple models that I had duplicates of for them.
Spacemice -- Input devices for a 3D world.
Top

That's quite a find. That's not my writing on the left and I can't see the right but it would probably be one of the hardware guys writing.

We may very well have done an ADB prototype or two. I did hire a guy to work on the Mac (Gulkan or something like that). That was probably 1996-7. Those are sporb balls, not SpaceController balls. There is probably a Sporb circuit board inside.

Anything else interesting in the box that would indicate who sold it? They are pretty ugly; I doubt something we would give to Apple. Where did it ship from? New England? It was probably someone from the company.

Being ADB, if you found an old Mac, they may still do something. Maybe move the cursor. Any other software that I could find would require a very old Mac.
Top

jwick wrote:Being ADB, if you found an old Mac, they may still do something. Maybe move the cursor. Any other software that I could find would require a very old Mac.

I just so happen to own a couple of very old Macs.

One more scratched off the list... these are hard to find! 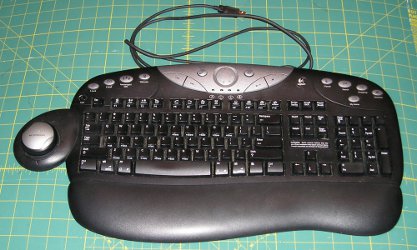 I'll say! Those are VERY difficult to find. There may have also been a white one. I'm not sure if that ever got out of the building.
Top

Can you get a hold of one of these tablets? https://youtu.be/oIbXW3BVaAI?t=1m43s It would be nice to have this as an addon module to any tablet. Imagine having a 3dMouse on each side of the tablet for dual action (control the camera and object simultaneously.)

http://www.3dconnexion.com/company/industrial.html 7.4 to 11 Newtons over a 1.5 MilliMeter displacement, that is more than double the spring stiffness of the Space Navigator. viewtopic.php?f=38&t=5201#p36671 They can do this because it's held firmly into place, like the keyboard/3DMouse combo you've found. The module is only 60 grams, light as a feather compared to massive anchor block other 3DMice are attached to.

Maybe 3DConnexion can make keyboards that you can slide a light 60 gram 3Dmouse module onto, or partner with keyboard manufacturers to make it happen. Alternatively have a frame that can vice onto most any keyboard, and slide a 3DMouse onto that frame. If both the keyboard and 3DMouse are wireless you can easily move them around to anywhere in the room as one piece. Maybe the frame could also have a shared battery pack for both the keyboard and 3DMouse.
Top

Hypersonic wrote:Can you get a hold of one of these tablets? https://youtu.be/oIbXW3BVaAI?t=1m43s It would be nice to have this as an addon module to any tablet. Imagine having a 3dMouse on each side of the tablet for dual action (control the camera and object simultaneously.)

I have known about devices like this, but did not include them on my website because they were essentially exclusive to industrial applications.
The device in the video is the KUKA smartPAD which uses an OEM 6DOF cap made by SpaceControl GmBH.
I have kept an eye open on eBay for such devices, but I fear that it would bundled along with several tonnes of robotic arm.

At one time, LogiCad3D/3DConnexion had the '12DOF ScreenMan'.
An LCD monitor with a control cap on each side of the screen. I cringe to think how astronomically expensive these must have been back in the 90s.
Spacemice -- Input devices for a 3D world.
Top
Post Reply
29 posts